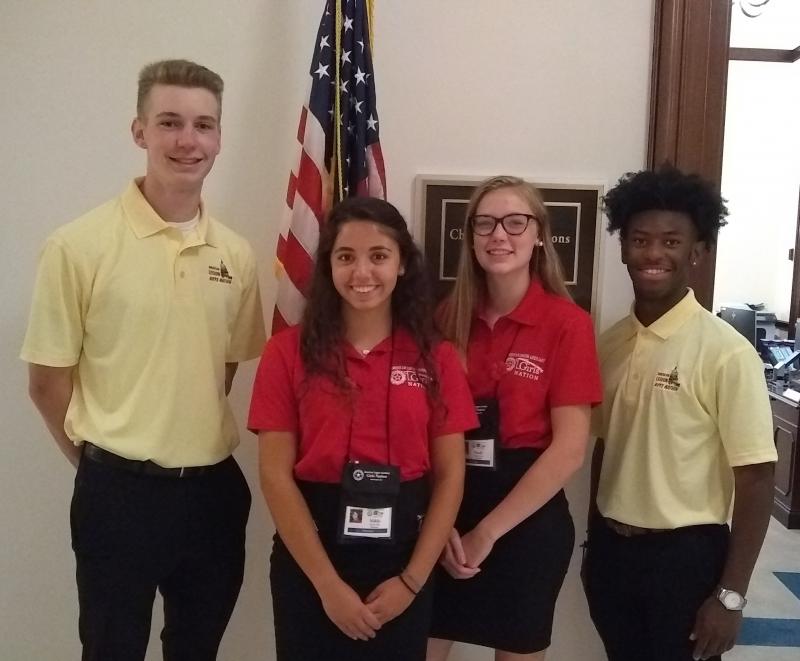 2018 Legion Boys Nation and ALA Delaware Girls Nation Senators were (l-r) Andrew Furman, Nikki Pilla, Madison Rice and Michael Bell. SUBMITTED PHOTO  January 20, 2019.
CAPE GAZETTE
The American Legion and the American Legion Auxiliary Department of Delaware have announced that the 2019 Legion Boys State and ALA Delaware Girls State Program invitations have been distributed to all high schools within Delaware. As part of these premier programs, students will study local, county, and state government processes during this weeklong, nonpartisan political learning experience in June.

All students having completed their junior year of high school in 2019 are eligible. Eligible students will participate in many activities, including receiving special instruction in parliamentary procedure, and organize themselves into two mock political parties. Students will then campaign, hold rallies, debate; ultimately they will vote to elect city, county, and state officials. Once elected to office, delegates are sworn in and perform their prescribed duties. Attendees not elected to office are given appointments and visit the offices of those elected to share their viewpoints as citizens.

“These programs are designed to benefit our youth and give them a head start in today’s society,” said Lisa McCarley, ALA Delaware Girls State director. Lyman Brenner, Legion Boys State director, and other volunteer leaders encourage the young citizens to continue their community service by becoming active members, as well as leaders in their communities and local governments.

Every spring, approximately 30,000 young men and women across the country are selected to attend both Legion Boys State and ALA Girls State programs in their respective states. Two outstanding citizens from each of the 50 Boys and Girls State programs are then chosen to represent their state as “senators” at Legion Boys Nation and ALA Girls Nation Programs held in Washington, D.C. in July.

American Legion and American Legion Auxiliary members have dedicated themselves for nearly a century to meeting the needs of our nation’s veterans, military, and their families both here and abroad. They volunteer millions of hours yearly, with a value averaging $2 billion each year. As part of the world’s largest patriotic service organizations, volunteers across the country also step up to honor veterans and military through annual scholarships and with these programs, teaching high school juniors to be leaders grounded in patriotism and Americanism.

To learn more about their mission or to volunteer, donate or join, visit www.Legion.org or www.ALAforVeterans.org.