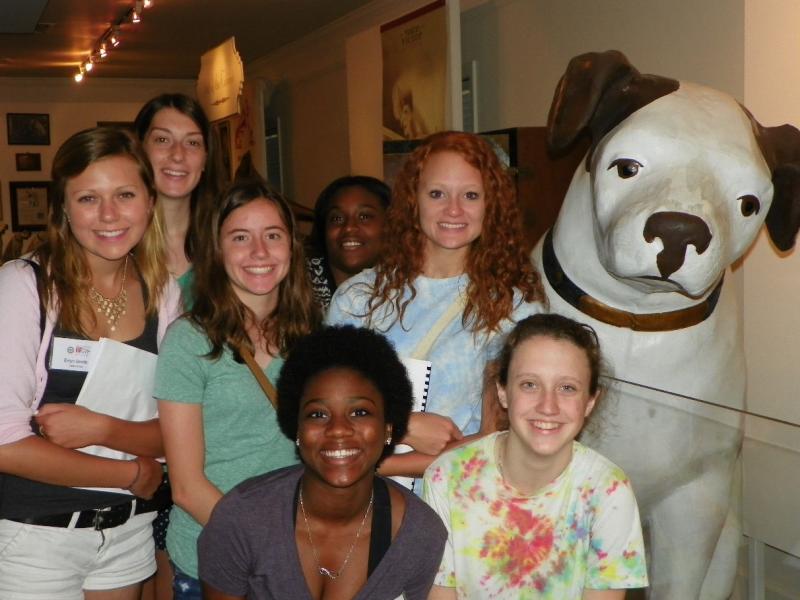 Delaware Girls State 2016 participants visited the Johnson Victrola Museum. Shown are in back (l-r) Laura Wagner and Rasheeda Russell. In the middle are Erryn Smith, Madison Thune and Jessalyn Kenton. In front are Kiara Kitgo and Sally Lyell. SUBMITTED PHOTO May 2, 2017
Local students representing high schools all over Delaware have been selected to represent their schools at the American Legion Auxiliary Delaware Girls State Program, a premier patriotism and government leadership conference.

Over 100 young women have been selected to attend the American Legion Auxiliary Delaware Girls State session in Dover this summer. As part of the annual program, outstanding students are chosen from their local high schools to spend a week learning about the inner workings of state, local and county governments.

This premier leadership conference is designed to provide practical insight into the workings of government, promote youth civic engagement, instill a sense of pride in America, and empower the next generation of women leaders, providing them with a network that lasts a lifetime.

A key component of the ALA Delaware Girls State program is the mock legislative sessions in which the girls write and debate bills. Campaigns are held to elect local officials and an ALA Delaware Girls State governor. In addition to their government forums, the delegates hear from distinguished guest speakers and learn how they themselves can influence their own future.

“The ALA Delaware Girls State experience is a once-in-a-lifetime opportunity for young women across our nation,” said Lisa McCarley, director of the Department of Delaware Girls State Program. “After attending ALA Girls State, the girls come back to their communities filled with patriotism and pride, having gained new leadership skills and built strong connections with the other girls.”

The American Legion Auxiliary’s marquee Girls State program, first presented in 1937, is one of the most respected and coveted experiential learning programs presented in the United States. The program epitomizes the ALA’s mission to honor those who have brought the nation freedom through an enduring commitment to develop young women as future leaders grounded in patriotism and Americanism. The young women become knowledgeable about the democratic process and how the republic form of government works at the state and national levels.

Members of the American Legion Auxiliary, which was founded in 1919, have dedicated themselves to meeting the needs of United States veterans, military, and their families at home and abroad. They volunteer millions of hours yearly, with a value of nearly $3 billion. As part of the world’s largest women’s patriotic service organization, Auxiliary volunteers across the country also step up to honor veterans and military through annual scholarships and with ALA Girls State programs, teaching high school juniors to be leaders grounded in patriotism and Americanism. For more information about the auxiliary’s mission or to volunteer, donate or join, go to www.ALAforVeterans.org.